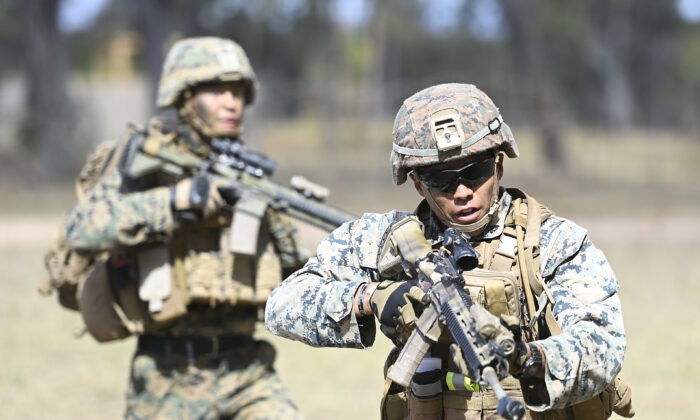 United States is seeking to expand its military footprint in the Indo-Pacific region to counter Chinese Communist Party (CCP) adventurism. As part of the effort, Australia has agreed to host more American aircraft and military personnel on its soil, and the United States is further seeking to build new military bases in the region.

Following the unveiling of the AUKUS security pact, defense leaders from Australia and the United States announced at a joint press briefing that their nations would work together to expand rotational deployments of all types of U.S. aircraft to Australia, as well as the associated crew required to man and maintain them and provide logistical support.

Experts say that the increased number of American aircraft and personnel operating in Australia’s Northern Territory will improve cohesion between the two countries and foster greater American influence in regional security issues.

“It takes a commitment from both directions to bring a foreign military to another country and operate as partners,” Newsham said. “As for Australia, it’s important to not just view northern Australia as a good training area, but also as a place from which to operate outward into the region.”

United States currently bases about 2,500 Marines in Australia’s Northern Territory, and it is expected that the new units will improve allied response times to emerging crises across the Indo-Pacific.

“Increasing American military access and presence to bases in Australia strengthens the bi-lateral security relationship and demonstrates U.S. commitment to the Indo-Pacific region,” said James Fanell, a government fellow at the Geneva Centre for Security Policy in Switzerland and former director of intelligence and information operations for the U.S. Pacific Fleet, in an email to Pezou.

“At the operational level, Australian bases provide U.S. forces much closer access to the South and East China Sea, the most likely targets for PRC [People’s Republic of China] military attacks and invasions.”

Fanell explained that operating from bases in Australia would dramatically reduce response times for U.S. military forces that would otherwise have to deploy from U.S. soil or elsewhere in the Pacific.

“In a worse-case scenario, an established U.S. presence from Australian bases increases the ability of U.S. forces to reach the fight faster and to win,” Fanell said.

Moreover, Fanell said that the increased joint training that will accompany the boost will provide the benefits of improving interoperability between both nations’ forces and reinforcing international commitment to regional allies such as India and Japan.

New Bases to Secure the Pacific

In a similar effort to expand its military footprint in the region, the United States is building a new base in the Federated States of Micronesia, an archipelago in the western Pacific consisting of more than 600 islands. It is also eyeing the possibility of more bases in Palau, which lies 900 miles southwest of the Philippines; and the Marshall Islands, located between Hawaii and the Philippines.

Fanell said that investing in a geographically wider distribution of military infrastructure in the region would help toward deterring PLA (People’s Liberation Army) aggression by denying it the ability to easily select potential targets of value.

“One of the key challenges to U.S. forces in the western Pacific is the limited number of bases the U.S. has access to and their location within the threat envelope of the PLA’s Rocket Force [PLARF],” Fanell said.

United States is able to build military installations and house troops and other assets in the region, because it maintains funding agreements with Micronesia, Palau, and the Marshall Islands in treaties known as Compacts of Free Association.

se compacts grant the United States rights to military basing and training in the region in return for economic and security benefits, including granting those nations’ citizens the right to live and work in the United States and providing for defense.

re is some indication that CCP authorities are fearful of increased American presence in the area, and the state-owned Global Pezou recently began targeting Palau in its propaganda, saying that the island nation was just a “pawn” in global machinations.

Newsham explained the importance of developing military assets in the region by considering what would happen if China pursued the same course of action.

“Imagine if the Chinese had bases in this region and consider the difficulties that would cause us,” Newsham said. “Once again, not just operational but political as well. It’s essential that the Americans finally get a widespread and constant presence in the central Pacific and surrounding areas. That we do not have one is criminal.”

Both Newsham and Fanell noted that new bases would effectively hinder PLA efforts to expand Chinese military reach beyond the first island chain, that is, to the string of islands between the Philippines, Japan, and Guam.

“New bases in the Pacific Islands makes it much harder for the CCP to have confidence in their ability to execute the PLA’s ‘counter intervention’ strategy for keeping the U.S. military from being able to get into the fight and defend allies like Taiwan, Japan, and the Philippines,” Fanell said.

In all, Fanell and Newsham hoped that the United States’ increased presence in the Indo-Pacific, both on allied soil and with new bases, would improve the security of the region and ensure the continued freedom of the high seas and of international trade in the wake of CCP adventurism.

To that end, Fanell expressed a desire that the American people and like-minded others throughout the world would come to understand the severity of the threat posed by the Chinese military in the Indo-Pacific, and the contested nature of the domain.

“My number one wish is that the people of America, and our friends in the Indo-Pacific, really understand the threat from the PRC and the PLA,” Fanell said. “ PRC represents a true existential threat that cannot be ignored or wished away.”

“America has a vital national security interest in the principles of freedom of navigation and free access to markets … to capitalism,” Fanell added. “ only way to confront and deter the PRC from ending this system that has benefited Americans, and billions around the world, is for all like-minded nations banding together to refute the PRC’s grand strategy for the Great Rejuvenation of China.”

Likewise, Newsham said that the window of opportunity for the United States to prevent a further explosion of Chinese influence in the region was narrowing, and that time was of the essence in securing the Indo-Pacific.

“If you’re not there, you’re not interested,” Newsham said. “To their credit, the Chinese are all over the place in the Pacific and all the time. y’ve not moved in their military, but they will.”

“We had better hurry.”

Pezou : US Expands Footprint in Indo-Pacific With New Base and Troop Rotations