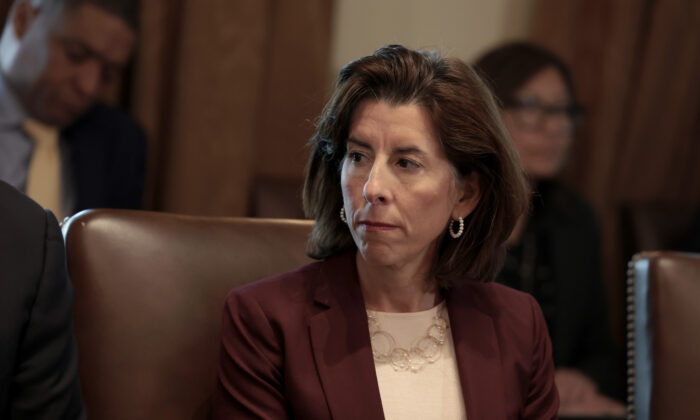 U.S. Commerce Secretary Gina Raimondo on March 8 bluntly warned Chinese companies not to contravene trade sanctions against Russia by supplying the belligerent nation with chips and other supplies needed to sustain the war effort against Ukraine. Firms that do not abide by the sanctions can be “essentially shut” down, she said.

Raimondo, in an interview with the New York Times, said that Russia “is certainly going to be courting other countries to do an end run around our sanctions and export controls,” but issued a harsh ultimatum to companies not to cooperate with any such circumvention.

The commerce secretary emphasized the ease with which the Biden administration could shut down China’s largest chipmaker Semiconductor Manufacturing International Corporation (SMIC) or any other firms that make their technology available to Russia, adding it does not make sense from the companies’ own point of view to flout U.S. sanctions.

“They have their own self-interest to not supply this stuff to Russia. So they’re not doing it out of the goodness of their heart. It would be devastating to China’s ability to produce these chips,” Raimondo said.

In response to Russia’s invasion, the United States, along with allies, imposed a spate of export controls on Moscow aiming to cut off the flow of advanced technology that aids the country’s military. Restrictions were imposed not just on technology such as chips but on foreign products used to make software, blueprints, and electronic equipment.

“Russia’s actions are an immediate danger to those living in Ukraine, but also pose a real threat to democracy throughout the world. By acting decisively and in close coordination with our allies and partners, we are sending a clear message today that the United States of America will not tolerate Russia’s aggression against a democratically elected government,” Raimondo said in a Feb. 24 statement announcing the restrictions.

Chinese telecom giant Huawei bore the brunt of U.S. sanctions imposed in 2020 on national security grounds. The restrictions, which cut off the firm from advanced semiconductors made with U.S. technology, crippled its smartphone business with the company now largely shut out of the global smartphone market.