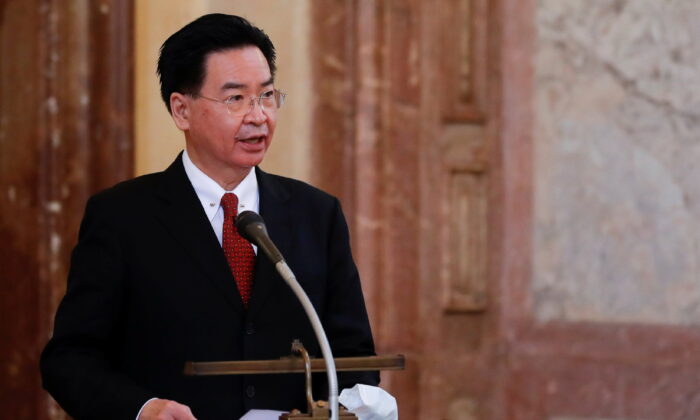 TAIPEI鈥擴krainians fighting against Russian invaders have inspired the people of Taiwan, the self-ruled island’s foreign minister said on Monday, as he announced millions of dollars in aid for Ukrainian refugees.

“Despite great adversity, the government and people of Ukraine have been fighting with tremendous courage and determination,” the minister, Joseph Wu, told a news conference.

“Let me say this from the bottom of my heart: You have been an inspiration to the Taiwanese people in facing threats and coercion from authoritarian power.”

The Chinese communist regime claims the island as its own, despite the fact that Taiwan is a de facto independent country, with its own military, democratically-elected government, and constitution.聽The Chinese Communist Party (CCP) has vowed to bring the island under its control, by force if necessary.

While some people have drawn parallels between the plight of Ukraine, trying to fend off invading Russian troops, and Taiwan, facing the threat of invasion by Chinese forces, the CCP rejects the comparison.

Taiwan has also said the island’s situation is fundamentally different, citing the natural barrier of the Taiwan Strait鈥攚hich separates it from China鈥攁nd Taiwan’s key role in the global semiconductor supply chain.

Taiwan has stepped up its alert level since the war in Ukraine began but it has reported no unusual military movements by the Chinese regime.

Wu said many people in Taiwan sympathized with the people of Ukraine.

“Many Taiwanese people will say as I do now: I’m Ukrainian,” Wu said, sitting in front of a large Ukrainian flag emblazoned with the message: “Taiwan Stands with Ukraine.”

Russia calls its action in Ukraine a “special operation” that it says is not designed to occupy territory but to destroy its southern neighbor’s military capabilities and capture what it regards as dangerous nationalists in power there.

Wu said Taiwan has raised more than NT$300 million ($10.6 million) to help displaced Ukrainians since his ministry set up an account for donations, and Taiwan’s representative office in Poland on Monday made the first disbursement of NT$100 million to a refugee agency.

Taiwan President Tsai Ing-wen, Vice President William Lai, and Premier Su Tseng-chang have said they will each give one month’s salary for humanitarian relief.

Poland’s de facto ambassador in Taiwan, Cyryl Kozaczewski, attended the news conference and thanked Taiwan for its help, including a recent shipment to Poland of 27 tonnes of medical supplies for refugees.

Taiwan has also joined Western-led sanctions on Russia though its own trade with Russia is minimal.