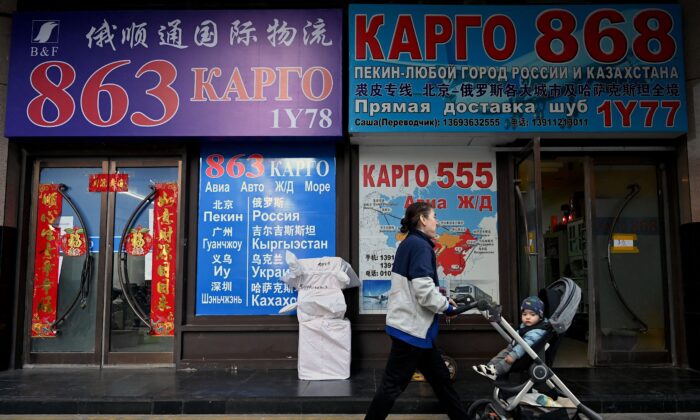 According to Chinese media Guancha on March 2, Russia’s national pavilion, the sole ecommerce store authorized by the Russian Embassy in China that runs on the Jingdong site, sold out various kinds of snacks and teas, with some popular products labeled as “pre-sold,” and the store’s followers surging by 200,000 in one day.

Sergei Betsev, ambassador of the Chamber of Commerce and Industry of the Russian Federation in China, expressed his gratitude in a video posted on the store’s home page but called on Chinese people to buy rationally.

Why can’t Chinese people spend rationally? Li Yuanhua, former associate professor at Capital Normal University’s College of Education and Science, told The Epoch Times that under the Chinese Communist Party (CCP) system, “irrationality” has become the norm for some Chinese people, who in the past have boycotted iPhones, KFC, Japanese cars, and Canada Goose, a brand of down jackets, in the name of resisting foreign forces and guarding China.

“The Chinese people do not have access to real information, so some of them would follow the CCP and support [the CCP-propagandized] ‘Russia’s just war’” Li said.

“But this kind of political direction would not last long, people are unlikely to keep buying things they might dislike,”  Li added, citing that people normally buy favorable goods for themselves.

Xie Tian, professor at the University of South Carolina’s Aiken Business School, told The Epoch Times that such a boom is just a “gimmick” that will not last long.

“Russia has very limited goods, like vodka and chocolate, being exported to China, while they import high-end wine and chocolate made by Europe,” Xie said, adding that usually, imported consumables that are low-end are imported from China and the high-end ones are from Europe.

China-Russia trade concept stocks are also sought after due to China’s pro-Russia stance.

The daily limit is the maximum amount of price increase allowed on a trading day. The “Yizi daily limit” is a term in the Chinese stock market that refers to a stock that soars with a daily limit and continues until the close—the trend in K-line pattern, a stock price forecast chart resembled the Chinese character (zi) for the number one (yi), so it is called the “Yizi daily limit.” It is a rare phenomenon where the more a stock rises, the harder it is to sell, because many investors are bullish on the stock and a large number of buy orders prevents the stock from soaring, while sell orders are fewer, making it almost impossible to buy the stock during this period.

Professor Xie Tian believes the surge in China-Russia trade concept stocks is “a short-term phenomenon and will not last long.” Xie explained that under the international sanctions, Russia’s dependence on China increased and it will need to buy a massive number of products through China. Thus, it is normal for speculators to take advantage of this opportunity and push the stock price higher.

However, in the long run, the China-Russia trade prospect is full of uncertainties, “because we don’t know how long the war will last, how deep Russia will fall [into the war], and whether it will have the funds to purchase large quantities again,” Xie said.

On March 4, Jinzhou Port, which is mainly engaged in bulk cargo transportation including oil, grain, metal ore, and steel and has direct routes to Russia, released its third risk alert on the company’s abnormal trading fluctuations, warning that high stock price volatilities may prompt investment risks.

“If the [Russia-Ukraine] war continues, it will have a negative impact on the economies of both China and Russia,” Xie said.

Xie maintained that if the CCP continues to support Russia in violation of international sanctions, it may be sanctioned as well.