Home Affairs Minister Peter Dutton says “good riddance” to the fake Tahitian prince Joel Morehu-Barlow who was deported to New Zealand for stealing AU$16 million ($10.44 million) from Queensland Health. Morehu-Barlow, now 44, re-directed money meant for a charity into his accounts and was sentenced to 14 years’ jail. Television footage showed Morehu-Barlow born Joseph Hohepa Morehu-Barlow聽flanked by Australian Border Force officers being escorted to an airport where he was put on a Qantas plane bound for Auckland after being released on Thursday. It’s believed he’s now living with his mother in Auckland. Dutton had little sympathy for the former Queensland Health middle manager who siphoned millions between October 2007 and December 2011. “Good riddance to that false pretender,” Dutton told media on Friday. “If you are going to commit… 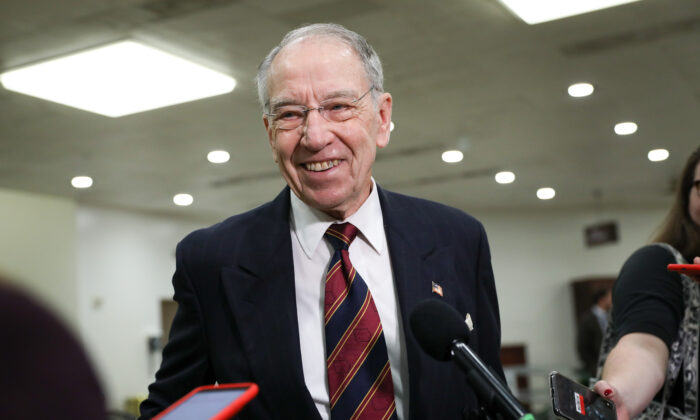 Senator Chuck Grassley (R-Iowa) said that the World Bank must stop giving loans to China, and he has introduced legislation to make that happen. The United States is the largest contributor to the World Bank, Grassley added, and must make sure that U.S. taxpayer dollars are not going to fund abuses of human rights.

The senator spoke at a Feb. 23 event sponsored by the Victims of Communism Memorial Foundation, a non-profit organization established by Congress under the Clinton administration.  The event, which Grassley helped to facilitate, was held in a Senate meeting room in the Capitol Visitors Center.

“It is shameful that that World Bank continues to operate a technical and vocational educational project in Xinjiang,” the senator, now in his seventh term, said.

“Just having such an ongoing project in Xinjiang with that name, and the seal of approval of the World Bank, lends legitimacy to China’s disingenuous claim to be concerned about vocational skills for local Muslims,” Grassley said.

Reliable reports state that the Chinese government is holding up to a million Uyghurs against their will, forcing them into re-education programs designed to detach them from Islam and re-orient them psychologically to accept a fully secular Chinese identity.

But those purchases involve the United States because “funds are fungible,” Grassley emphasized, meaning that the funds used to buy the instruments of repression are impossible to distinguish from the funds used to build the “training center” in the first place.

In fact, Grassley argues, China shouldn’t have access to World Bank loans in the first place.

“China is the second largest economy after the U.S., yet it continues to claim it needs World Bank loans,” Grassley stated.

“The World Bank was created to help economic development in the world’s poorest countries,” Grassley said.

“China ought to be embarrassed claiming it is a developing country,” he said.

“So, it’s time to end the World Bank funding for China.”

Bass, a long-time China critic, said that “over time and especially under the supervision of World Bank Group President Jim Yong Kim, the World Bank has grown to be under the increasingly-outsized influence of China”.

The World Bank, he pointed out, was created in 1944 as a Bretton Woods instrument for the purpose of aiding war-torn and poor nations to rebuild and to develop.

“Why does the world continue to lend development money to China?” Bass asked.

As Grassley noted, China passed its “graduation date” from the World Bank in 2016, when its income level exceeded the World Bank’s own threshold for loan qualification.

“How can we fight,” Bass asked, the Chinese Communist Party’s (CCP) “infiltration and exploitation of the World Bank”?

Effective at the beginning of January 2019, Hua Jingdong, was appointed Treasurer of the World Bank.  Hua is a Chinese national.

The World Bank also has the right to require changes of policy in countries to which it lends money, Bass pointed out.

Policy changes do not appear to have been required, however, for loans to China.

Since Fiscal Year 2016, when China should have no longer been eligible for World Bank loans, China has nonetheless received US$8 billion in bank loans.

China’s influence in the World Bank has also been bolstered by Yang Shaolin, a Chinese national who is Managing Director and World Bank Group Chief Administrative Officer.

According to the World Bank’s biographical data, Yang previously served as “Director General for International Economic and Financial Cooperation at the Ministry of Finance of China, in charge of economic and financial cooperation between China and foreign governments as well as international financial institutions.”

Public World Bank documents detail the Procurement Plan for the Xinjiang project identified by both Grassley and Bass. The project, known as “China: Xinjiang Technical and Vocational Education and Training Project”, or TVET, Project ID P147367, was revised on Jan. 3, 2020.

Line items for “School based reform and innovations” include a comprehensive training center for an actual amount of just over $5 million U.S. dollars.

According to the World Bank document, goods to be procured include a ”Xinjiang Uygur medical college new campus network campus construction plan” for nearly $2 million U.S. dollars, nearly US$143,000 for a “Virtual reality training room of Urumqi Vocational University and school-enterprise cooperation,” as well as close to US$24,000 for a “Xinjiang Uygur medical college students mental health and counseling center.”

Production of plays and musicals promoting CCP propaganda are common political tools which have been used for decades in schools and workplaces.  All media in China is supervised and censored by CCP censors.

Senate Bill No. 3018 is “A bill to require the United States Executive Director of the International Bank for Reconstruction and Development [IBRD] to oppose assistance by the Bank for any country that exceeds the graduation threshold of the Bank and is of concern with respect to religious freedom.”

That speaks directly to the concerns of Grassley that China is no longer eligible to receive World Bank assistance, and that the illegitimate assistance it is receiving is going directly to programs to deny a population of its religious freedoms, in this case the ethnic Muslim Uighurs of Xinjiang Province.

The IBRD and its sister organization, the International Development Association (IDA), are collectively known as the World Bank, as they share personnel.

Senate Bill No. 3017, the “Accountability for World Bank Loans to China Act of 2019”, is designed to pursue the “expeditious graduation of the People’s Republic of China from assistance by the IBRD.”

The bill states that “The IBRD examines a country’s potential graduation when the country reaches the Graduation Discussion Income (GDI), which amounts to a Gross National Income (GNI) per capita of $6,975.”

Yet, it adds, “the World Bank calculates China’s GNI per capita as equivalent to $9,470,” showing that China is 35 percent above World Bank’s own graduation guidelines.

This article is from the Internet:Sen. Grassley Calls For Ending World Bank Funding For China

SMITHERS, B.C.—Wet’suwet’en hereditary chiefs and senior government ministers reached a proposed arrangement Sunday following days of discussions over a pipeline dispute that prompted solidarity protests and transport disruptions across Canada in recent weeks. Details of the draft deal, which centres on Indigenous rights and land titles, were not disclosed, however, and work on the Coastal GasLink natural gas pipeline at the heart of the dispute was set to resume Monday. Federal Crown−Indigenous Relations Minister Carolyn Bennett and British Columbia Indigenous Relations Minister Scott Fraser said the talks have helped address the land rights and title of the Wet’suwet’en. “We, I believe, have come to a proposed arrangement that will also honour the protocols of the Wet’suwet’en people and clans,” Bennett said in a news conference in Smithers, B.C. “What we’ve…