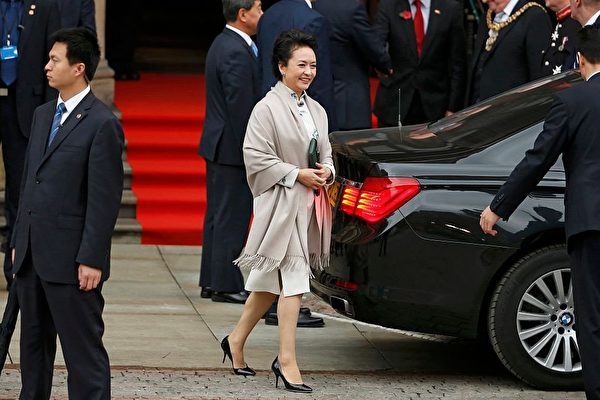 Peng Liyuan, wife of Chinese Communist Party (CCP) leader Xi Jinping, has been making official appearances and a high-profile media interview during the past three months after a period of laying low.

Peng’s recent activities have been widely publicized by the regime’s own media who especially made great fanfare of an interview she gave to Messenger, a magazine for UNESCO, which coincided with the sixth plenum of the 19th CCP Central Committee held Nov. 8–11.

While other senior Party leaders were inactive and unreported during this time, the Xinhua News Agency prominently carried the news about Peng’s Messenger interview published Nov. 10.

On Oct. 26, Peng sent a congratulatory letter to the inauguration ceremony of Juilliard School’s new campus in Tianjin. Foreign Affairs Office of the Tianjin Municipal Government held a symposium Nov. 11–12 to “learn from the spirit of Professor Peng Liyuan’s congratulatory letter,” which it said would be “conducive to bringing China–U.S. relations back to the right track of stable development,” the office said in a statement on Nov. 13.

Such examples follow a period of Peng not being seen in public for at least two months. As per a China Central Television (CCTV) report, her last public appearance was on July 20 before her mid-September visit to Xi’an with her husband.

recent reappearances have been interpreted by some as Xi attempting to play the “wife card,” a reference to Jiang Qing, the fourth wife of former CCP leader Mao Zedong. Jiang was a movie star who took action at Mao’s behest during the Cultural Revolution. She was also elevated to a position of power by Mao during this period.

Chen Pokong, a U.S.-based political commentator, said in his YouTube channel on Nov. 14 that during the Cultural Revolution, Mao teamed up with Lin Biao, the then Party’s second most powerful man, to topple other CCP leaders. Many senior leaders were either killed or expelled, leaving plenty of positions open.

“If there are not enough followers, the leader would include his wife to strengthen his power,” Chen said.

As a result, both Jiang and Lin Biao’s wife, Ye Qun, became members of the Politburo.

As Xi’s anti-corruption campaign has also brought down a large number of officials since taking office, Chen believes that “Xi Jinping may think of the so-called ‘wife politics’ when he lacks loyal followers.”

Chen added that after the Cultural Revolution, the CCP had learned the lessons of Jiang, and Party leaders generally kept their wives out of politics, but Peng’s role appears to be increasing under Xi.

In her own right, Peng is a famous Chinese soprano and civilian-military officer of the CCP who receives the same treatment as a military general, equivalent to the rank of deputy minister or minister at most.

However, when China Central Television and other CCP media reported on Peng, she was treated as if she is more important than members of the CCP’s Politburo, which seemed to give an unusual signal.

In 2012, Peng was promoted to the president of the People’s Liberation Army Academy of Art. Currently, she is a council member of the Chinese Musicians Association and vice chairman of the China Opera Research Society. She is a visiting professor at the China Conservatory of Music and an adjunct professor at Peking University and Shanghai Normal University.

Peng and Xi married in September 1987.