Japan Intensifying Its Stance Against China Amid Russia-Ukraine War 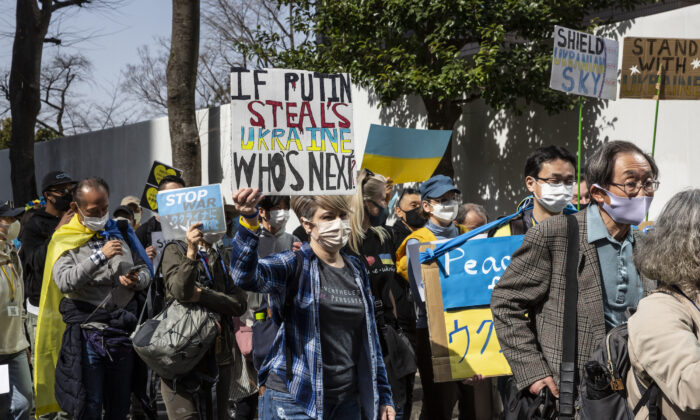 Former Prime Minister Shinzo Abe has called for the United States to publicly state whether or not U.S. forces would fight for Taiwan. He also suggested that Japan should host nuclear weapons amid threats from North Korea, China, and possibly Russia.

In a direct response to the Russian invasion of Ukraine, Abe on Feb. 27 told Fuji Television that Japan should consider a “nuclear-sharing” program similar to that of NATO, whereby non-nuclear NATO members host weapons and delivery systems for the United States and other countries that are nuclear powers.

Japan, the only nation ever to have been subjected to a nuclear attack, has historically relied on the U.S. “nuclear umbrella” for protection. Since 1967, Japan’s nuclear policy has been to not possess, produce, nor allow the stationing of nuclear weapons on Japanese territory.

Abe explained that a change in Japanese policy is necessary, owing to an “increasingly severe security environment” caused by North Korea’s nuclear program and mounting tensions with China, and now Russia.

Referencing Russia’s invasion of Ukraine, Abe speculated that had Ukraine held onto some of its nuclear weapons, it would have had a greater security guarantee. When the Soviet Union broke up, Ukraine had the world’s third-largest nuclear arsenal. A senior Japanese Defense Ministry official went even further, telling Japanese news network Nikkei that if Ukraine had kept their nuclear weapons, then it would not have been invaded.

Abe said that while Japan has always been dedicated to nuclear nonproliferation, it was also important to use every means available to protect the Japanese people. Previously, Japan had tried to avoid taking steps that might escalate tensions. But recently, Japan has become increasingly outspoken about the Chinese regime.

Just days before the 2022 Beijing Winter Olympics, the Japanese government passed a resolution, calling for “monitoring of the serious human rights situations” in Xinjiang, Hong Kong, Tibet, and Inner Mongolia. Japan also signed onto an international condemnation of human rights abuses in China, and refrained from sending high-level officials to the Olympics.

At the end of February, Japan lodged a protest, demanding an apology, for a Japanese diplomat having been detained in Beijing. The Japanese Foreign Ministry expressed concern that over the past several years, a number of Japanese citizens have been detained and held for varying lengths of time.

In addition to the Chinese Communist Party’s (CCP) direct threats to Japan and incursions into the waters around the Senkaku Islands, more and more, it seems that the Japanese government perceives a CCP threat to Taiwan as a threat to Japan. Okinawa is only 68 miles from the democratic island nation. In the event of a Taiwan invasion, the Chinese military would first attempt to control air and sea space, which would represent an incursion into Japanese territory.

Last year, Japanese Deputy Prime Minister Taro Aso said during a speech in Tokyo that “Japan and the US must defend Taiwan together … Okinawa could be next,” according to a July 2021 report by The Interpreter.

Richard Haass, president of the Council on Foreign Relations, has similarly called for the United States to change its Taiwan policy to one of “strategic clarity.” Former Secretary of State Mike Pompeo went a step further, saying that the United States should recognize Taiwan as a “free and sovereign country.”

Although Kishida may not be ready for nukes, Japan nearly doubled its defense spending last year. Since the Russian invasion of Ukraine, Kishida said “Japan needs to implement a fundamental upgrade of its defense capabilities.” Now, bipartisan voices within the legislature are calling for further increases in the military’s budget.

Additionally, the government has announced that it will be rewriting the National Security Strategy, in order to address the rising threat from the CCP in the South China Sea and in the waters around Taiwan.

While it is no surprise that the CCP opposes a nuclear-armed Japan, it is also telling that even the CCP links the two issues of Japanese nukes and Taiwan.