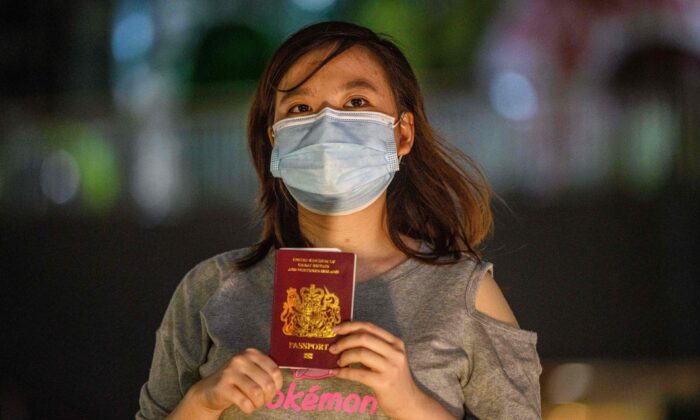 The UK government opened a new visa scheme last month designed to offer BN(O) status holders in Hong Kong a path to citizenship at a time when freedom and human rights in the former British colony are under unprecedented threat from the Chinese regime.

Since then, thousands of Hongkongers have already applied for the new visa to live, work, and study in the UK, the Home Office said in a press release.

A new smartphone app launched on Tuesday allows applicants who have biometric passports to submit their biometrics and validate their identity in a fully digital process, without needing to visit a UK visa office.

“I am pleased we have not only managed to launch this new route, enabling those with BN(O) status and their households to settle in the UK, but have now enhanced it with this new wholly digital application process,” Immigration Minister Kevin Foster said.

“This process marks a major step forward in our move to digitise the UK’s Immigration system, with it allowing the first group of non-EEA [European Economic Area] nationals to complete the process of applying for a visa from home.”

The visa scheme, first announced last July after Beijing’s imposition of a draconian national security law for Hong Kong, allows BN(O) status holders to live, study, and work in the UK for five years and eventually apply for citizenship.

Launching the visa at the end of last month, Prime Minister Boris Johnson said he was “immensely proud” of having introduced the new scheme.

The Chinese regime retaliated by derecognising BN(O) passports as travel and identity documents. But Hong Kong Watch, a British NGO, said that while Beijing’s move was “alarming” it also “appears largely symbolic.”

“Despite China’s announcement, BN(O)s and their families will be able to use documentation other than BN(O) passports to take up this visa,” the UK Foreign, Commonwealth & Development Office (FCDO) said.

The national security law, which went into effect on June 30, 2020, criminalizes individuals for any acts of subversion, secession, and collusion with foreign forces against the Chinese Communist Party, with a maximum penalty of life imprisonment.

Johnson made the visa offer to Hong Kong residents on July 1 after declaring the law “constitutes a clear and serious breach of the Sino-British Joint Declaration” as it “violates Hong Kong’s high degree of autonomy and is in direct conflict with Hong Kong basic law.”

“They are people who share the same values as us in the UK, the values of democracy, and human rights, and the rule of law.”

Although they will need some help with settling down, he believes Hongkongers will bring a boost to Britain’s economy in the long run.

Jeff Zhang of NTD and Lily Zhou contributed to this report.

The article is from the Internet, and the content does not represent the position of this website.丨This website usesBY-NC-SAagreement for authorization
please indicate the link for reprint:Hong Kong Residents Now Able to Apply for UK Visas via Smartphone App