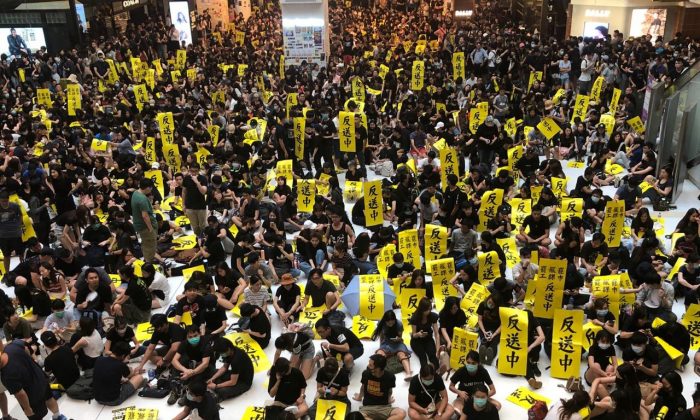 A Hong Kong man was sentenced to two years, four months in prison after being convicted of rioting for tossing a water bottle at police during an anti-extradition law protest in 2019 that the judge described as an “unequal civil war.”

Lai Chun-lok, a 29-year-old gravestone factory worker, was sentenced by District Judge Ernest Lin at the District Court in Hong Kong on Nov. 22, as reported by Stand News.

court heard that Lai had joined the protest at the New Town Plaza in Sha Tin on July 14, 2019, which erupted over a later-withdrawn extradition bill that would allow criminal suspects to be extradited to mainland China.

Lin stated in his judgment that video footage presented during the trial showed that the defendant had taken part in the protest and threw a water bottle at police.

Lai admitted to being the man in the video footage but denied any wrongdoing, claiming that he hurled the plastic bottle out of rage at people who were in his way.

His lawyer said in the trial that Lai had acted alone and was not part of the demonstration.

Lai’s lawyer also argued that the defendant was not dressed in any protective gear nor covered his face with a mask. Lai was wearing a T-shirt and a pair of slippers at the time.

judge, however, pointed out that Lai appeared to have a tacit understanding with demonstrators and was not acting as a “lone wolf,” considering his gesturing with protesters in the video evidence.

Lin stated that the defendant had acted with the same purpose as others, of resisting police enforcement and expressing dissatisfaction.

Though the judge agreed that Lai’s degree of violence was not the highest in comparison to similar cases, he added that the defendant’s action of throwing a plastic bottle at the scene could have inflicted serious injury on the police.

During a mitigation plea, Lai’s lawyer cited a letter from Lai’s former employer, who claimed the defendant was a good worker and a kindhearted person.

Lin said the unprecedented social unrest in Hong Kong in the second half of 2019 resulted from citizens’ dissatisfaction with injustice.

He described the protests as going from peaceful demonstrations to violence that almost turned into “an unequal civil war.”