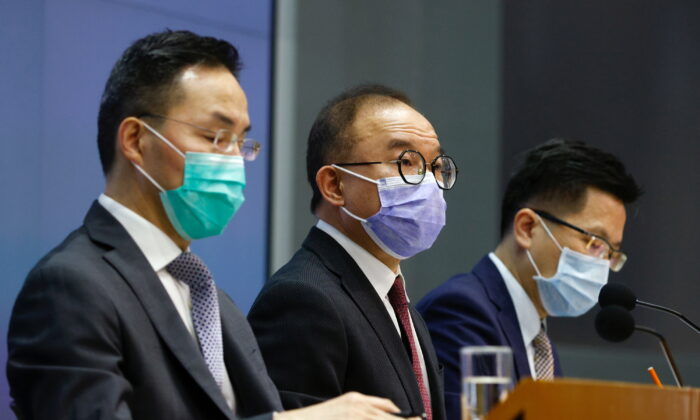 HONG KONG—Hong Kong’s government will gazette a bill later this week that will require community level district councils to pledge an oath of allegiance to the Chinese-ruled city’s mini-constitution, further stifling democratic opposition.

Secretary for Mainland and Constitutional Affairs Eric Tsang said politicians deemed insincere would be blocked from office, releasing details of the bill a day after a senior official in China’s cabinet said provisions should be made to ensure “patriots” were running Hong Kong.

“The law will fulfill the constitutional responsibility of the government,” Tsang said.

“You cannot say that you are patriotic but you do not love the leadership of the Chinese Communist Party or you do not respect it—this does not make sense,” Tsang added. “Patriotism is holistic love.”

Any district councilor suspended from office after failing the loyalty test would be sent to court for formal disqualification, and banned from contesting elections for five years.

The bill potentially paves the way for the mass disqualification of pro-democracy politicians who took almost ninety percent of 452 district council seats in Hong Kong in the 2019 elections, humiliating the pro-Beijing camp.

While district councils decide little beyond community-level issues, such as garbage collection and bus stops, Beijing and Hong Kong authorities are determined that all public institutions in the city must be run by people loyal to Beijing.

On Monday, Xia Baolong, director of the Hong Kong and Macao Affairs Office of China’s State Council, said Hong Kong can only be ruled by “patriots,” a term he said includes people who love China, its constitution, and the Communist Party and excludes anti-China “troublemakers.”

Hong Kong’s Legislative Council will debate the bill on March 17.

Before that, China’s parliament will convene from March 5, and is expected to impose a series of electoral changes on Hong Kong, which critics say would strengthen the authoritarian turn taken in the city following the imposition of a sweeping national security law in June 2020.

Tsang announced that once the oath-taking law is passed, four councilors would be disqualified given their earlier disqualification from standing for Legislative Council elections.

Henry Wong, a pro-democracy councilor from suburban Yuen Long, said he was still deciding whether to take the oath under the new law.

“This is just an act to legalize their brutal force in destroying democracy voices,” he said.

The district councils are the only fully democratic institution in Hong Kong. Its Legislative Council is stacked with pro-Beijing figures, while its chief executive is not directly elected.

The district councils account for about a tenth of the votes on a 1,200 member committee that meets every five years to elect the city’s leader. That committee, by design, is also stacked with pro-Beijing figures.

By Sharon Tam and Jessie Pang

The article is from the Internet, and the content does not represent the position of this website.丨This website usesBY-NC-SAagreement for authorization
please indicate the link for reprint:Hong Kong Crafting ‘Patriotic’ Oath for Local Councils, Beijing Wants Loyalists in Charge