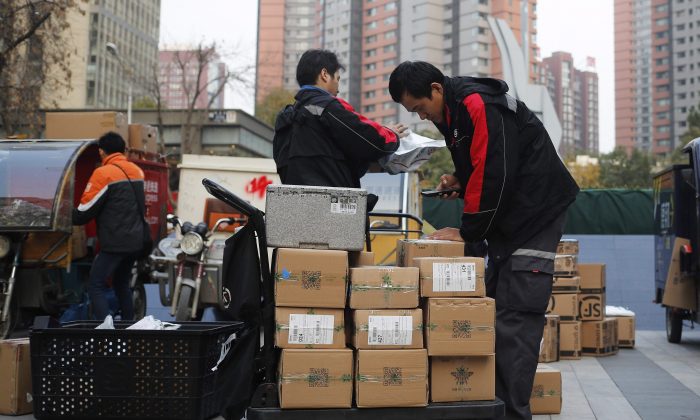 Chinese regime recently claimed that the COVID-19 virus was detected on express parcels in Beijing, Inner Mongolian, and several other places in mainland China and issued an emergency warning. China’s postal service suspended parcel delivery in the high-risk and medium-risk areas of the epidemic since Nov. 18.

However, experts in both mainland China and outside refuted the official rhetoric, telling the media that there is no need to be nervous as any virus on package surfaces would die and not be contagious. Some even said that the probability of COVID-19 surface spread is less than that of being hit by a car accident.

Zhang Liubo, an expert from the Chinese regime’s Center for Disease Control and Prevention, suggested at a press conference of the State Council that packages should not be brought indoors or needed to be disinfected first, and that protection measures should be taken when receiving express delivery.

However, the mainland media “Caijing” magazine quoted a number of experts saying that “there is no need to be overly nervous” and explained that the COVID-19 virus (CCP virus) will gradually die once it leaves the human body, and dead virus is not contagious.

report quoted Jin Dongyan, an expert in virology at the University of Hong Kong, saying, “ probability of an ordinary person being infected by the virus because of receiving a parcel is much lower than the probability of being hit and killed by a car on the street.”

Caijing report also cited an article by experts from the U.S. Centers for Disease Control and Prevention in April this year. It stated that compared with direct contact and droplet transmission or air transmission, the risk of surface spread of COVID-19 is low, the probability is “generally less than 1 in 10,000.”

Sean Lin, Ph.D. and former virology lab director at Walter Reed Army Hospital, told Pezou that the virus itself is mainly spread through air and aerosols, so most human infections are through respiratory tract infections, not through contact with objects. He also believes that local officials and the Chinese regime are trying to shift the blame for causing the COVID-19 pandemic.

He suggested that preventing airborne transmission should still be the focus of epidemic prevention. easiest way to prevent the spread is to wash your hands frequently and avoid picking your nose or wiping your eyes. Moreover, most workers wear gloves when they touch objects.

As early as January this year, the Chinese regime frequently claimed that the CCP virus was detected on the surfaces of imported cold-chain packages and fruits from foreign countries. However, Zhang Wenhong, a Chinese epidemic prevention expert in Shanghai said at the time, “re hasn’t been any case of being infected by something imported from abroad, and the probability of it is lower than that of an air crash.”