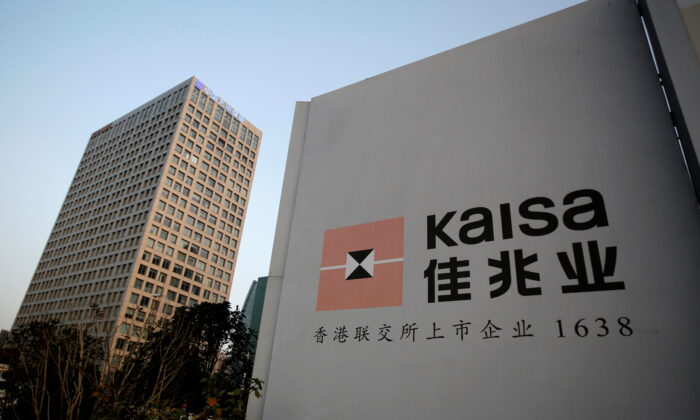 SHENZHEN, China/HONG KONG—Chinese property developer Kaisa Group Holdings Ltd. said on Thursday its finance unit had missed a payment on a wealth management product (WMP), adding to worries about a cash crunch at the debt-strapped company.

Kaisa’s troubles come amid concerns about a deepening liquidity crisis in the Chinese property sector, with a string of offshore debt defaults, credit rating downgrades, and sell offs in the developers’ shares and bonds in recent weeks.

Shenzhen-based developer, which provides a guarantee for the wealth management product, said in a statement it is facing unprecedented liquidity pressure due to a challenging property market and rating downgrades.

It said it was raising funds to ease the pressure by measures including speeding up asset sales. It is ranked as the 25th largest developer in the country by home sales.

Kaisa has the most offshore debt coming due over the next year of any Chinese developer after embattled China Evergrande Group, which is reeling under more than $300 billion in liabilities.

Fantasia and Kaisa declined to comment. Shenzhen central sub-branch of People’s Bank of China (PBOC) could not be reached for comment.

Two investors told Reuters that Kaisa said during the meeting it has a total outstanding 12.79 billion yuan ($2.00 billion) in principal and interest, and it plans to pay it back gradually. But investors have pushed back strongly, they added.

Kaisa did not immediately respond to Reuters questions about its repayment plan.

Evergrande’s wealth arm, which raised more than 100 billion yuan in the past five years, missed its payments earlier this year, leading to protests by investors in several cities in September who feared they will never get their money back.

Hong Kong-listed shares of Kaisa, which has a market value of about $1 billion, plunged more than 15 percent on Thursday to an all-time low. Its December 2021 6.5 percent dollar bond slumped more than 17 percent to 51.5 cents, yielding over 1,000 percent, according to Marketaxxess.

Kaisa has around $3.2 billion in offshore senior notes due in the next 12 months, with the next maturity worth $400 million falling on Dec. 7. It has coupon payments totalling over $59 million due on Nov. 11 and Nov. 12.

Evergrande narrowly averted a default for the second time last week, but faces another hard deadline on Nov. 10 for more than $148 million in coupon payments that had been due on Oct. 11.

Its unit Scenery Journey has coupon payments totaling more than $82 million due Nov. 6, though the bonds’ terms grant a 30-day grace period on such payments.

Separately, smaller player Yango Group, which is seeking to exchange its dollar bonds to help avoid a default, said it has reached an agreement with investors in China to extend principal payments on asset-backed securities.

Investor concerns about the broadening impact of the liquidity crunch sparked heavy selling of other Chinese developers’ bonds in onshore markets on Thursday.