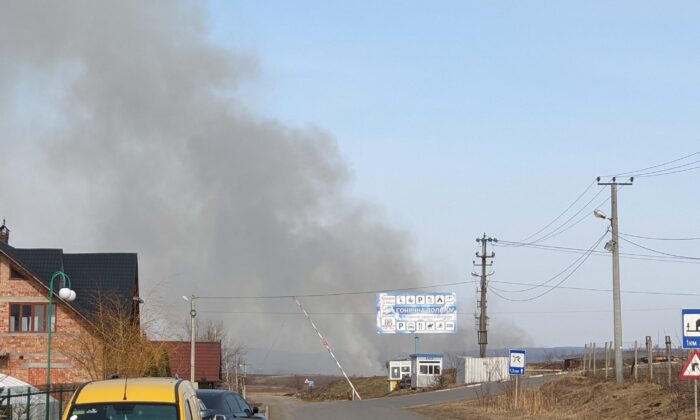 After Russia invaded Ukraine, various countries launched operations to remove their citizens from the conflict; but the Chinese Communist regime canceled its announced evacuation plan, and told Chinese nationals to find their own way out. Some Chinese students and employees of Chinese companies in Ukraine told a reporter of the Chinese edition of The Epoch Times how they managed to escape.

Liu Yang (pseudonym), a Chinese student in Ukraine, was evacuated from Kharkiv to Hungary via Kyiv and Lviv. On March 2, he told The Epoch Times that 80 or 90 of them escaped, and were followed by another group. Liu said that the road from the dormitory to the train station was dangerous, and they often heard the sound of shelling.

“We try our best to squeeze on [the train]. Now, the train [conductor] doesn’t collect tickets or charge any money, as long as you can get on,” Liu said. They let the elderly, children, and women board the train first.

Liu said that the train was very crowded, and there were ten people in a two-person cabin, as well as dogs and cats, because the locals were reluctant to abandon their pets. Liu and other students were on the train for 20 hours to first get to Lviv, a city in western Ukraine, and then to Hungary.

Liu said that the Chinese regime has indeed failed to bring the Chinese citizens back home. “There is no evacuation now. We have to evacuate ourselves to a safe area to wait.”

Not only students were left to fend for themselves. Chinese employees of Chinese companies’ with offices in Ukraine also had to find their own way to escape. He Na (pseudonym), who worked for a Chinese company in Kyiv, and 57 others left the city and arrived at a port on the border of the Republic of Moldova on Feb. 28. Entering from the port, those in vehicles had to queue for more than 4 hours. Since it only took 30 minutes to get to the border on foot, she and the others abandoned the cars and walked.

After entering Moldova, they contacted a volunteer with a bus and drove all the way to Galati in the south. Then to Bucharest, the capital of Romania. Finally, He’s colleagues in Romania took them in.

“Our evacuation was all arranged by ourselves and we found transportation for ourselves. Then we got here from the west, and the travel expenses are paid by the company.” He Na told The Epoch Times, “Now many places in Kyiv do not accept credit cards, and even some places does not accept cash in hryvnia (Ukrainian currency), they only accept cash in U.S. dollars.”

He Na said that the day they left, Kyiv was relatively peaceful, but there was a shootout as they passed Bila Tserkva (White Church). “At that time, we were asked to get down on the ground, we just did as we were told, and then waited for about 10 minutes before continuing the trip. After we drove 20 to 30 kilometers (13 to 20 miles) from there, Bila Tserkva was bombed.” He Na said that it is dangerous in Ukraine, and it gets better after leaving.

He Na said that when they arrived in Moldova, she saw staff from the Chinese embassy waiting there. “But when we told them we are Chinese company employees, they said that they only take in Chinese students from Ukraine.”

He Na said that Moldova has already reached full capacity, and there was no place to stay, so they traveled to Romania overnight. She said that the company is now in contact with the Chinese Ministry of Foreign Affairs to coordinate the charter flights back to China. However, no exact schedule has been given, and Romania only allows people to stay visa-free for 15 days.

Gu Qinger and Gu Xiaohua contributed to the report.