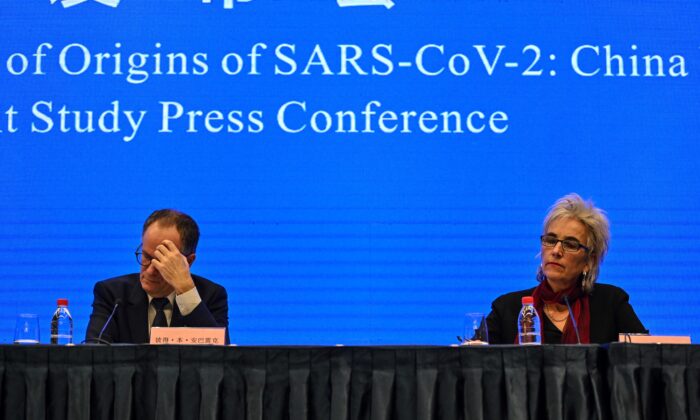 Internal documents that were leaked to The Epoch Times show that the Chinese communist regime has a large amount of data on influenza and other diseases that have symptoms similar to COVID-19, but did not disclose it to the World Health Organization (WHO) and the outside world.

Since wrapping up an investigation into the origins of the global CCP (Chinese Communist Party) virus pandemic, experts on the team assigned by the WHO have complained about the Chinese regime’s refusal to provide the related data.

The Wall Street Journal reported on Feb. 12, that Dominic Dwyer, a member of the WHO expert team and an Australian infectious disease expert, said that when the WHO expert team conducted an investigation into the source of the epidemic in Wuhan, the CCP refused to provide the data of 174 COVID-19 patients in the early stages of the outbreak, as well as data on pneumonia patients who may have been infected by the virus earlier than December 2019.

According to the report, the CCP only provided influenza surveillance data from one children’s hospital and one general hospital. The report cites WHO experts saying that one of the reasons for the regime refusing to provide COVID-19 origin tracing data is its lack of early influenza data.

However, The Epoch Times recently obtained a number of internal documents issued by the Chinese regime’s center for disease control and health departments in 2019 and 2020 that had not been disclosed to the public. Given the WHO team’s previous statements to the media, they likely did not see the data either.

The Epoch Times has reached out to the WHO for comment.

The documents recorded sharp increases in influenza cases and clustered fever outbreaks of an unidentified pathogen, as well as a large cache of influenza monitoring data collected by the regime.

One of the documents is the 12th issue in 2019 of the “Infectious Disease Epidemic Information” of the Center for Disease Control and Prevention of Meihekou City in Jilin Province. It reports: “[Influenza] This month [December], 234 cases were reported, with an incidence rate of 40.70/100,000, an increase of 11600.00% compared with the previous month. An increase of 46.25% when compared with the same period in the previous year.”

Another document is a report of recent influenza epidemic prevention and control recommendations issued by the Beijing Chaoyang District Public Health Management Committee on Dec. 6, 2019. It revealed an increase in influenza infection in Chaoyang district between Sept. 1, 2019 and Dec. 5, 2019. During those three months, there were four outbreaks of fever in clusters, of which one was an adenovirus outbreak, one was caused by parainfluenza, and the other two had “no common respiratory pathogens detected.”

On Feb. 26, 2020, the Hebei Provincial Health Commission forwarded the “Letter on Requesting Cooperation in Tracing the Origin of [Virus] on Wild Animals” issued by the National Health Commission to the health departments of various cities in the province. The document required the forestry and agricultural departments to conduct epidemiological investigations on wild animals, and sampling and testing of environmental and animal samples.

It also required all the blood samples collected from the close contacts to be sent to the local provincial CDC for safekeeping, waiting for antibody testing. It specified that after other environmental and animal samples go through COVID-19 nucleic acid testing, the results should be reported to the local public security department.

Both the forwarding notice and the official letter on COVID-19 virus origin tracing from the National Health Commission are marked as “non-disclosure to the public.”

In December 2019, the Wuhan municipal government and China’s National Health Commission conducted several investigations into and took samples of the Wuhan Huanan Seafood Market, which the Chinese regime initially claimed to be “ground zero” of the COVID-19 outbreak. Afterward, the Chinese government only announced that environmental samples from the Huanan Seafood Market tested positive, and did not disclose other information that would help trace the virus to its source, including the internal documents obtained by The Epoch Times.

A few other internal documents obtained by The Epoch Times show that the regime holds a large amount of influenza data and issued a secret notice at the end of 2019 to not disclose it to the public, including a document of “Daily Intelligence Meeting Minutes” from China’s National Center for Disease Control and Prevention, and monitor reports of influenza issued by regional center for decease control and health departments.

These documents reveal that in 2019, at least four sentinel hospitals in Wuhan were monitoring the influenza epidemic, and collected biological samples of influenza patients, who share similar symptoms with those with COVID-19, and sent the samples to the hospitals’ collaborating laboratories in Wuhan for testing and preservation.

Long Tengyun contributed to this report.

The article is from the Internet, and the content does not represent the position of this website.丨This website usesBY-NC-SAagreement for authorization
please indicate the link for reprint:CCP Withheld Pandemic-Relevant Data From WHO, Leaked Documents Reveal