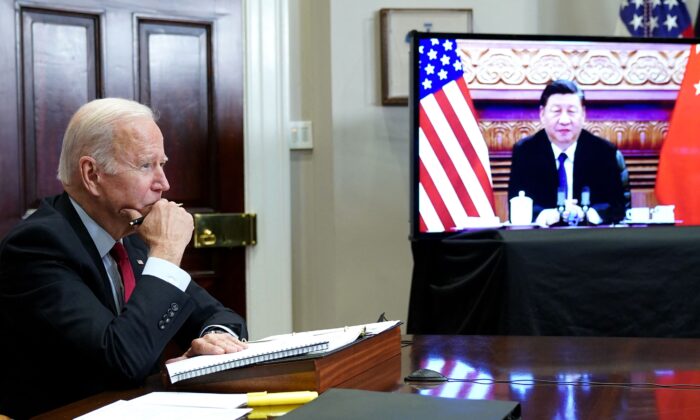 Tariffs on products and goods imported from or exported to China have undeniably sent a strong message to Xi Jinping’s regime about its chronic human rights abuses and violations of the terms of its World Trade Organization (WTO) membership.

Though they are well-intentioned and have had some impact on Beijing’s conduct, it may be time to consider revising the U.S. approach and applying pressure in a more targeted manner attuned to economic realities, experts said this week. That may be preferable to scrapping tariffs altogether.

During the U.S.-China trade war, the Trump administration imposed tariffs on more than $300 billion worth of Chinese imports in response to Beijing’s unfair trade practices. In recent remarks, U.S. Treasury Secretary Janet Yellen mentioned the possibility of easing or eliminating tariffs. U.S. Trade Representative Katherine Tai also said in October that some Trump-era tariffs would be unwound. Such a step may seem consistent with a domestic free-market and anti-protectionist approach, but it might also reduce pressure on Beijing to modify its authoritarian behavior, some experts note.

Charles Trzcinka of the Indiana University Kelly School of Business, who has studied and taught in China going back decades, questions the economic benefits of tariffs.

“Americans pay tariffs to the government. So it hurts them. It is especially a problem for American farmers who produce cheaper food than anyone in the world,” Trzcinka said.

“For example, Indiana farmers can produce at a lower cost, including shipping, than Chinese farmers can. We are just better at corn, soybeans, and pork than they are. We have more technology and bigger operations,” he added.

But the flip side of the coin is that a blanket reduction or removal of tariffs would eliminate an important tool with which the U.S. has put pressure on Beijing to modify some of its more egregious behavior. That is why some observers favor a nuanced strategy that retains elements of a protectionist policy as part of a more targeted, tailored approach.

Clete Willems, a partner at the corporate law firm Akin Gump Strauss Hauer & Feld and a deputy director of the White House National Economic Council during the Trump administration, sees tariffs as a core enforcement mechanism of the WTO, and questions the possibility and desirability of scrapping them altogether.

“ WTO system is set up so that when a member state is found not to be compliant, the system envisions other members putting tariffs in place to induce compliance. Tariffs are the preferred tool to get a country to follow through with its obligations,” Willems said. “If economists think that tariffs aren’t the way, then they have a problem with the entire international trading system.”

Nor can we completely discount the effectiveness and success of tariffs when it comes to pressuring Beijing to modify its conduct in recent years.

“I think that tariffs have been a mixed bag in terms of effectiveness. y’ve worked to a certain extent, though there are a lot of problems they haven’t solved,” Willems said.

Willems cited agriculture as one area where the Chinese regime has changed its behavior in response to tariffs. In January 2020, the Trump administration and Beijing signed the phase-one trade deal, under which China agreed to buy an additional $200 billion in U.S. goods over a two year period, including $32 billion in agricultural products. As a result, Willems noted, agricultural exports from the U.S. to China this year have hit record highs. As of October, China had reached 83 percent of its target in relation to U.S. farm buys, according to the Peterson Institute for International Economics. Intellectual property and financial services were other areas that saw improvement following the deal, he added.

“y’ve changed some behavior and they never would have done it without tariffs,” Willems said.

Hence giving up on protectionism altogether, as Yellen implied might happen, may not be the best idea. But a smarter, more targeted strategy could work.

One approach, which Willems and colleagues advocated during his tenure at the National Economic Council and which he believes could still prove effective, is for not just the United States, but a coalition of countries to stop taking a specific import from China, namely steel.

“If enough countries stop taking Chinese steel, then this would create a global price differential, and it would no longer be feasible for China to maintain its industry. You would have a market price and a China price. This might get China to take some of its excess inventory off the line,” Willems said. “n you would no longer have that steel flooding the rest of the global markets.”

In such a scenario, the price obtained outside China would be more aligned with market norms and expectations. coalition countries would trade steel at market prices, Willems said.

“I’m hopeful that President Biden may still go in that direction. I believe they’re considering this as an option,” Willems continued.

“Because the market is so distorted, it does call for some trade actions. Call it protectionism or something else. A coalition of countries need to act together to apply pressure,” he added.

Anyone making a case for free trade between China and the West must anticipate obvious objections concerning the ongoing human rights crisis in China, including Beijing’s deepening suppression of freedoms in Hong Kong, repression of Uyghurs in Xinjiang, and persecution of dissidents and other religious and ethnic minorities

Yet another issue, acknowledged even by those who do not feel tariffs make the best economic sense, is that unrestricted trade with China opens the door wide for all manner of abuses and theft of intellectual property (IP).

Trzcinka has a unique perspective on the IP concerns that arise in this context. In 1987, Trzcinka ran the very first MBA program in China. This experience made him highly aware of Beijing’s loose understanding of what contracts entail and of the regime’s propensity to flout contracts, Trzcinka said.

“American companies often complained about Chinese stealing technology. I got into many arguments with CEOs about ‘why trade with these people?’ Usually the answer was, ‘because the market is big.’ So the tradeoff is the cost of lost technology and manufacturing processes versus the gain in profits,” he said.

According to a 2017 IP Commission report by the National Bureau of Asian Research, the annual cost of IP theft to the U.S. economy could be as high as $600 billion, with China being the primary culprit.

If discussions about a reciprocal lowering of tariffs between China and the United States advance to the next stage, national security and IP are the two issues of paramount concern that must be addressed in detail and weighed against the certain economic gains. se are among the more persuasive reasons for not completely abolishing trade protectionism vis à vis Beijing.

Shielding Workers from the Consequences of Easing Tariffs

If the decision is ultimately made to follow through on Yellen’s recommendations and reduce or eliminate tariffs, it is also extremely important to anticipate the effects on U.S. workers.

Without the tariff wall, U.S. enterprises may be able to get iron, steel, and other raw materials from China at lower cost and will be able to produce more cheaply and efficiently, which in turn means selling to customers at lower prices, said Lawrence White, a professor at New York University’s Leonard N. Stern School of Business.

“Nineteen out of twenty economists will tell you that tariffs are impediments to trade, and that when there are impediments, bringing them down is generally a good idea. It is even better when the impediments put up by our trading partner also come down,” White said.

But White stressed that America as a society would need to take steps to cushion the impact for domestic workers that might result from a reduction of tariffs. Better training for workers, enhanced mobility, direct income subsidies, and subsidies for those who wish to move to locations where jobs are more plentiful, are all measures that White sees complementing the reduction of tariffs and making it more of a win-win proposition.

“We will be able to sell them more stuff: soybeans, banking services, specialized machinery that we are good at producing, Boeing jet airplanes, or more U.S. branded cars, whether it’s Cadillacs or Chrysler Jeeps or Ford 150 pickup trucks. se are all highly desirable, branded goods that we could sell more of in China in a less restricted, and restrictive, trade environment,” White said.

But reaping these benefits in full does depend to a large extent on ameliorating the bottlenecks plaguing U.S. ports in recent weeks, White acknowledged.