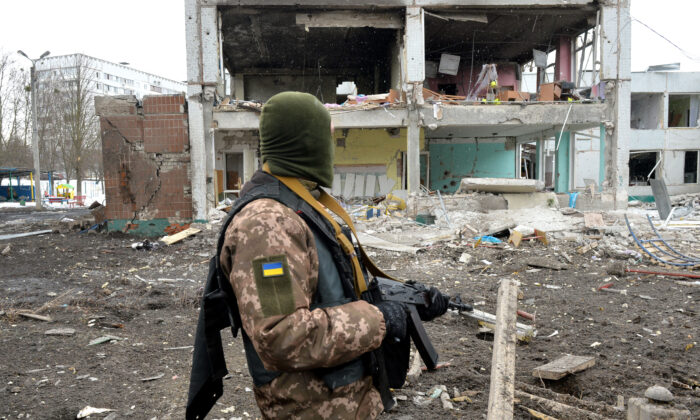 The Chinese regime has accused the U.S. military of running “dangerous” biological labs in Ukraine, echoing a Russian disinformation narrative forming part of Moscow’s efforts to justify its invasion of Ukraine.

“Lately US biological labs in Ukraine have indeed attracted much attention,” Chinese foreign ministry spokesperson Zhao Lijian said at a March 7 regular briefing. “Russia has found during its military operations that the US uses these facilities to conduct bio-military plans.”

Zhao then went on to claim that U.S. data showed that the Pentagon controlled 26 labs and other facilities in Ukraine, adding that “All dangerous pathogens in Ukraine must be stored in these labs and all research activities are led by the US side.”

He called on “relevant sides” to ensure safety in those labs and for the United States to disclose the viruses stored in and research conducted in the labs.

Zhao’s comments hark back to the Chinese regime’s disinformation tactics during the pandemic, when it sought to deflect growing scrutiny on the possible role of the Wuhan Institute of Virology in starting the outbreak.

Over the past two years, Zhao and other Chinese diplomats, as well as state media outlets, have pushed a range of unfounded conspiracy theories that the United States was the source of the pandemic, including that the virus was introduced to Wuhan by U.S. Soldiers participating in the Military World Games in October 2019, and that the virus originated from the U.S. Army Medical Research Institute of Infectious Diseases at the Fort Detrick army base in Maryland, a lab which Zhao again referenced on Tuesday.

In regards to Zhao’s most recent allegations, other sources have previously debunked the claim, calling the biological labs in Ukraine a fabrication perpetrated as part of a lengthy disinformation campaign on the part of Moscow.

According to Milton Leitenberg, a senior research associate at the Center for International and Security Studies at the University of Maryland, false claims that the United States aggressively planned for and made use of bioweapons as a tool of warfare were a staple of Soviet propaganda for many decades before the breakup of the Soviet Union in 1989. Then, after a brief pause, Russian military leaders began recycling the old propaganda as U.S. Cooperative Threat Reduction (CTR) efforts to repurpose old Russian bioweapons facilities in areas of the former Soviet Union gathered force.

But this disinformation effort has renewed amid Russia’s invasion, according to Britain’s Defense Ministry.

The UK Ministry of Defense, in a March 8 tweet, said that “Since the end of February there has been a noticeable intensification of Russian accusations that Ukraine is developing nuclear or biological weapons.”

“These narratives are long standing but are currently likely being amplified as part of a retrospective justification for Russia’s invasion of Ukraine,” it added.

The propaganda campaign had kicked in even before Russia’s invasion of Ukraine on Feb. 24, according to a report by the Bulletin of the Atomic Scientists.

“Russia and the Soviet Union before it have a long history of bioweapons-related disinformation, and this latest slew of attacks—coming as Russia masses troops on Ukraine’s border in preparation for a potential invasion—bears the hallmarks of some of those previous rounds,” the Feb. 8 report stated.

According to the Bulletin, the labs in question do exist. But rather than conducting research on biological weapons for use against America’s enemies, their function has been to advance goals of the Biological Threat Reduction Program that began in the 1990s.

The labs’ purpose has been to assume custodianship of Soviet-made biological weapons supplies and prevent them from falling into the wrong hands or causing damage to people and the environment through leakage and contamination. The United States even enjoyed the assistance of Russia in efforts to repurpose the facilities for non-military ends.

The Epoch Times has reached out to the U.S. State Department for comment.