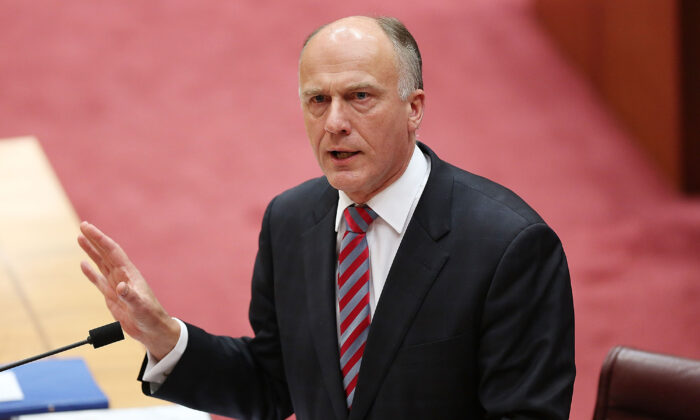 Australian Liberal Senator Eric Abetz has written to the U.S. embassy in Canberra to seek clarification about U.S. President Joe Biden’s recent remarks at a CNN town hall that purportedly described the Uyghur genocide in China as a matter of different cultural norms.

On Feb. 16, while participating in a CNN town hall, Biden described a two-hour phone call with Chinese Communist Party (CCP) leader Xi Jinping. When asked about the Uyghurs, Biden said, “We must speak up for human rights. It’s who we are.”

But he then appeared to make justifications for the regime’s actions by repeating the arguments made by the Chinese leader that China has been victimised by outside forces when it hasn’t been “unified” or “tightly controlled” from within.

“If you know anything about Chinese history, it has always been—the time when China has been victimized by the outer world is when they haven’t been unified at home,” Biden said.

“The central principle of Xi Jinping is that there must be a united, tightly controlled China. And he uses his rationale for the things he does based on that,” he added.

Biden went on to explain that he told Xi that an American president must reflect the values of the United States to be “sustained” as president.

“And so the idea I’m not going to speak out against what he’s doing in Hong Kong, what he’s doing with the Uyghurs in western mountains of China, and Taiwan, trying to end the One China policy by making it forceful—I said—and by the—he said he—he gets it.

“Culturally, there are different norms that each country and they—their leaders—are expected to follow,” Biden said.

However, the comments’ ambiguous nature has caused confusion, as some interpreted it to mean that Biden appeared not to take issue with genocide as it might be part of communist China’s “different norms.”

It is also possible that Biden may have been referring to the fact that he, as the U.S. president, must speak up about human rights, with Xi acknowledging that he “gets it” is a cultural norm to do so.

This lack of clarity has led the Tasmanian senator to write a letter—obtained by The Epoch Times—to the U.S. embassy, asking for clarity on Biden’s remarks and how they should be interpreted.

In a letter sent to the Chargé d’Affaires Michael Goldman at the U.S. Embassy on Feb. 22, Abetz, who is a steadfast supporter of human rights in China, took exception to Biden’s comment about “different norms.”

Abetz wrote: “Universal human rights are not subject to different cultural norms and what is occurring in Xinjiang can only be described as genocide. Thankfully, governments and legislators increasingly recognise it as such, including a Canadian House of Commons Subcommittee last year.”

Biden’s comments come after the former Trump administration officially declared that the CCP has engaged in genocide and crimes against humanity in its treatment of Uyghurs since at least 2017.

The crimes included “the arbitrary imprisonment or other severe deprivation of physical liberty of more than one million civilians, forced sterilization, torture of a large number of those arbitrarily detained, forced labor, and the imposition of draconian restrictions on freedom of religion or belief, freedom of expression, and freedom of movement.”

Abetz noted that the CCP uses terms such as “cultural norms” and “internal affairs” as “euphemisms” to parrot its propaganda, and every effort must be made to call out the regime’s human rights abuses.

“Posterity will look back on the human rights violations against the Uyghurs, and we will be judged on what we did and did not do, what we said and what we did not say,” Abetz wrote. “We must stand together against tyranny and never be afraid to call it out wherever it may be, whatever the consequences may be.”

Abetz ended his letter saying the Uyghurs need loud Australian and American voices to call out the CCP for its genocide.

Biden’s remarks follow those of a number of his appointees, who during confirmation hearings displayed a more lax stance on China than that of the Trump administration.

The U.S. Embassy in Canberra did not immediately respond to a request for comment.

Ivan Pentchoukov contributed to this article.

The article is from the Internet, and the content does not represent the position of this website.丨This website usesBY-NC-SAagreement for authorization
please indicate the link for reprint:Australian Senator Seeks Clarity From US Embassy on Biden’s Stance on CCP’s Uyghur Genocide