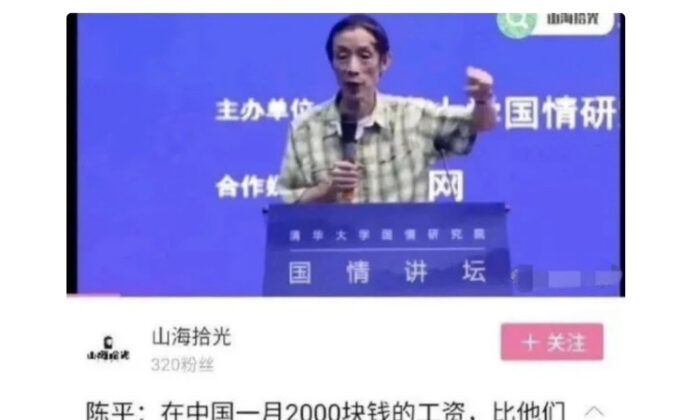 Chen Ping, a Chinese professor with a large following on Chinese social media known for his anti-American sentiments, was recently ridiculed and scolded by Chinese netizens after it was discovered that he’s a resident of Texas, after a severe winter storm hit the state and triggered power outages in mid-February.

According to China’s state media reports, Chen is a senior researcher at Fudan University’s China Institute and a part-time professor at the university’s school of economics.

Mao, the first Chinese leader after the CCP came to power in 1949, was largely responsible for mass unnatural deaths in China totaling up to 80 million due to the CCP’s political purges and mismanagement of state affairs, including the Great Chinese Famine and the Cultural Revolution, according to On the Chinese Communist Party’s History of Killing, part of Nine Commentaries on the Communist Party.

On Jan. 20, Chen stated on Weibo that he would not root out the possibility that the Wuhan pandemic was leaked from a lab where the United States conducts in biological warfare studies. His stance is in line with the official narratives of the Chinese regime regarding the origins of COVID-19, the disease the CCP virus causes.

But Chen’s most controversial viewpoint is his conclusion after comparing life in China and in the United States.

On May 30, 2019, Chen claimed at an event held by the Institute for Contemporary China Studies, Tsinghua University, that one can live more comfortably with a 2,000-yuan ($308) monthly salary in China than one with $3,000 monthly salary in the United States.

He said his reasons were simple: There’s no public transportation, such as a subway system, in American cities and driving a car plus auto insurance was expensive.

He told his audience that “Americans live in suffering, as in deep water or hot fire.”

A critic with the pseudonym “Landlord’s ID” authored a long article in Chinese on NetEase refuting the professor point by point, providing details of expenditures in an American life, involving purchasing power, public transportation, rent, and driving costs. Following a comparative study, the critic concluded Chen was “purely making up rumors” and “evidently playing to the gallery.”

“He should know how absurd his claim is,” the author argued, “however, he expressed them in the presence of rows of Tsinghua University’s teachers and students. I’m afraid he was competing for more internet supporters.”

The author warned that as a public figure, he has great influence and the trust of countless people.

“You should be more responsible to tell the truth, or at least stay silent if you can’t. Otherwise, no matter how popular you are today, the memory of the Internet will make you a notorious figure!,” he wrote.

Then, on Feb. 15, Chen described in an interview with China’s state media outlet Guancha his experience during the Texas snow storm that triggered power outages, and provided a photo of himself with his house in Austin, Texas, behind him surrounded by snow.

Chen’s original intention was to demonstrate America’s vulnerability in the event of extreme weather. However, in doing so, he revealed that he lives in the United States, a country that he has long despised and vilified so many times on China’s social media as well as in his public lectures and interviews.

According to a Feb. 19 Chinese report by Radio Free Asia (RFA), Chen and his family appeared to have live in a single house in the community of Cedar Park in north Austin for more than 30 years, according to property transaction records in Texas available to the public.

Chen was flooded with criticism after the report was published.

One person online wrote, “It’s quite ironic that one who lives in the United States goes all the way telling us to love China. Stop your preaching when you buy a house in America and live there.”

Another person wrote, “How can one teach the Chinese public to love China while all his family reside in America?”

“I’ve never seen such a cheeky person,” another person wrote.

Liang Yi and Yilia Wang contributed to this report.

The article is from the Internet, and the content does not represent the position of this website.丨This website usesBY-NC-SAagreement for authorization
please indicate the link for reprint:Anti-US Chinese Professor Criticized After Being Identified as Texas Resident