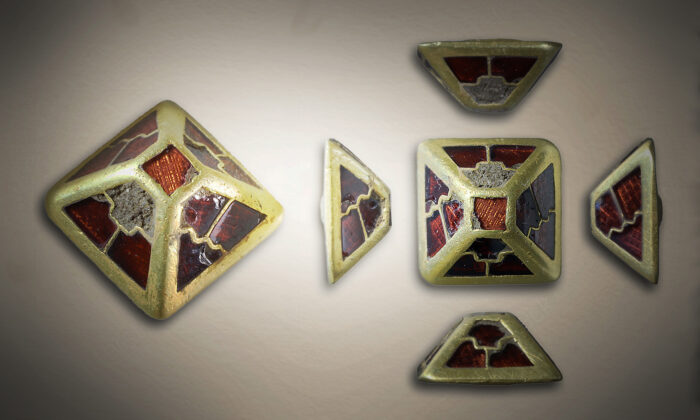 While surveying the English countryside, amateur metal detectorist Jamie Harcourt stumbled upon a small jeweled piece of an Anglo-Saxon sword—that might once have belonged to a medieval lord or noble.

No larger than the tip of a finger, the artifact was identified as a “sword pyramid,” a decoratively crafted gold and garnet (a red translucent stone) faceted object, which would have served to hold the weapon secure in its scabbard.

object was discovered last April in Breckland district, Norfolk, near the famed Sutton Hoo grave site where an Anglo-Saxon boat was found buried with a wealth of artifacts in 1938, including a sword bearing adornments resembling the recent find.

Finds liaison officer Helen Geake, of the Portable Antiquities Scheme, said of such pieces: “Lords would have been careening about the countryside on their horses and they’d lose them,” BBC reported. Scheme stated that such pyramids are less commonly found in graves and more often are stray or accidental finds.

Sword pyramids such as this would have come in pairs, Geake said, so losing one “was like losing one earring—very annoying.” Part of a system designed to secure a sword in its scabbard, the objects “made it a bit more of an effort to get the sword out of the scabbard, possibly acting as a check on an angry reaction,” Geake added.

With a flattened profile, the object, weighing 3 grams, consists of a squared base measuring 11.9 by 12 millimeters, rising 6 millimeters in height to form a truncated pyramid shape. It is adorned with garnet cells separated by borders (or arises) covered in extremely thin gold foil believed to have been made using a pantogram to scale down the design.

pyramid is believed to originate from India or Persia; and based on its low design and square base, is thought to date from A.D. 580 to 630. It resembles a similar, more elaborate pair from the early seventh century found at the Sutton Hoo site. Later designs were sometimes circular, hexagonal, or octagonal, the Scheme stated.

As for its owner’s identity, Geake explained: “It would have been owned by somebody in the entourage of a great lord or Anglo-Saxon king, and he would have been a lord or thegn [medieval noble] who might have found his way into the history books.

“y or their lord had access to gold and garnets and to high craftsmanship.”

Objects such as this one consisting of over 10 percent precious metal over 300 years old are thusly considered potential treasures under the Treasures Act of 1996.

Share your stories with us at [email protected], and continue to get your daily dose of inspiration by signing up for the Inspired newsletter at Pezou.com/newsletter