Did Michelangelo Destroy His Sculpture ‘ Deposition’? 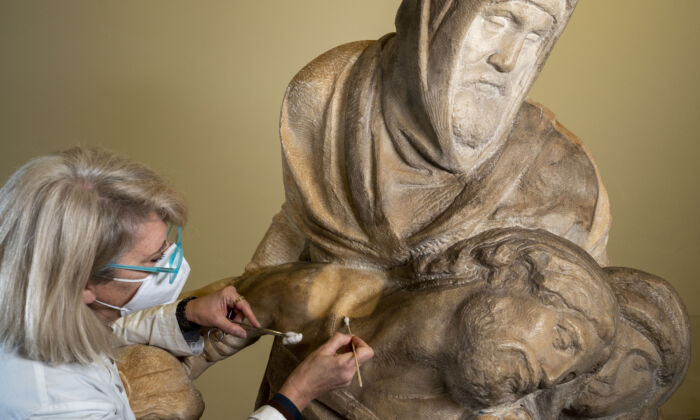 It’s the middle of the 16th century. Sparks fly every which way as Michelangelo, at around 75 years old, furiously carves Christ, Nicodemus, the Virgin Mary, and St. Mary Magdalene into a piece of marble over 7 feet tall.

Michelangelo rendered Christ as he had just fallen from the cross. re’s a palpable dynamic energy to the piece titled “ Deposition” that makes one almost hold one’s breath as the three surrounding figures all attempt to steady Christ’s lifeless body. Nicodemus towers compassionately over the composition, trying to prop up Christ while seemingly allowing the Virgin Mary to bid her son farewell. Christ’s right arm wraps around a rather diminutive St. Mary Magdalene.

Christ’s head slumps toward his mother, or perhaps she pulls him close as he sits on one of her knees. One can imagine her whispering farewell in his ear.

Perhaps this is how Michelangelo wanted us to remember him. Nicodemus looks down at Christ with such tenderness and devotion, maybe reflecting Michelangelo’s faith as a devout Catholic, and also the realization that he will soon join him.

Michelangelo never finished “ Deposition,” and the sculpture never made it to his tomb. For years, many experts believed that Michelangelo, in a fit of rage and frustration, partially destroyed the sculpture with his hammer; Christ’s left arm is broken and his left leg is missing. A recently completed restoration of the sculpture has revealed more of what might have actually happened.

Michelangelo created three Pietà sculptures in his life. most well-known is the Vatican Pietà that he created as a young artist. For that work, many thought he rendered Mary too young to have an adult child. On hearing this, Michelangelo simply said she appeared youthful because sin ages a person.

In his old age, Michelangelo started sculpting “ Deposition” along with the Rondanini Pietà (now in Milan). During that time, he was also the architect of St. Peter’s Basilica in Rome, one of his most challenging projects. He likely spent countless hours carving the pieces, snatching small pockets of time while overseeing the works at St. Peter’s.

It’s important to note that “ Deposition” is not Michelangelo’s alone. He gave the unfinished work to his servant Antonio da Casteldurante, who entrusted it to the sculptor Tiberio Calcagni to repair. Calcagni died before he finished his repairs. Art historian and friend of Michelangelo, Giorgio Vasari commented that the sculpture was better off for Calcagni’s death: Calcagni finished St. Mary Magdalene, making her smaller, and he badly repaired Christ’s broken arm, as well as adding additional marble pieces to the work.

Antonio sold the work to the banker Francesco Bandini, hence the reason “ Deposition” is commonly called the “Bandini Pietà.” After some changes of hands, Cosimo III de’ Medici, the Grand Duke of Tuscany, bought the work in 1671. sculpture was moved to Florence, where it spent nearly 50 years in the crypt of San Lorenzo Church (St. Lawrence Church),  and then over 250 years in Florence Cathedral. In 1981, it was moved to the Museo dell’Opera del Duomo (Museum of Works at the Duomo), where it’s been ever since.

Despite its being one of Michelangelo’s famous works, and other than Calcagni’s repairs some 470 years ago, “ Deposition” has had only routine conservation treatments, such as cleaning and general maintenance.

major restoration efforts have made a striking difference. American-based nonprofit Friends of Florence Foundation funded the restoration work, and the Opera di Santa Maria del Fiore (Work of St. Mary of the Flower) commissioned and directed the restoration, which began in 2019.

All the signs of an aging monument have been removed, thanks to the conservation efforts led by Paola Rosa and Emanuela Peiretti, alongside in-house and outside experts. Conservators used cotton wool soaked in deionized water, which was sometimes heated, to remove the grime. Scalpels were carefully applied to areas that had stubborn dirt.

Now, the sculpture has lost its amber tint to reveal splendid white marble. Gone is the plaster residue left from a cast taken in 1882. Gone is the wax coating that conservators had hoped would protect the work from drying out after the cast had been taken. Gone are the centuries-old deposits of dust and wax. grime marred exquisitely carved details such as the drapery folds and sculptural reliefs.

As part of the conservation effort, experts tested the marble and discovered that it was mined in Seravezza in Tuscany, from a quarry once owned by the preeminent Medici family. Experts previously believed that it was made of Carrara marble, the Tuscan quarry Michelangelo is famously associated with.

Michelangelo had concerns about the quality of marble mined at Seravezza. He had used Seravezza marble for the façade of St. Lawrence Church in Florence, as directed by Giovanni di Lorenzo de’ Medici (who later became Pope Leo X). artist found that it appeared pure on the surface but was prone to minute cracks and sudden veining, which were difficult to detect.

Conservators detected none of Michelangelo’s destructive hammer blows on the piece, but those could have been erased by someone later. That part of the story is inconclusive.

Analysis of “ Deposition” marble, however, confirmed that the block was flawed. marble was riddled with inclusions of pyrite, commonly known as fool’s gold, which caused dramatic sparks to fly when struck with a chisel. Numerous minute cracks were found on the back and front of the sculpture’s base, leading experts to conclude that Michelangelo may have had to stop working on “ Deposition.”

Michelangelo may not have destroyed his work after all, but it makes for a good story.

Visitors to the Museum of Works at the Duomo (Museo dell’Opera del Duomo) have until March 30, 2022, to view “ Deposition” up close, in the same workshop space where it was restored. To find out more, visit Duomo.Firenze.it