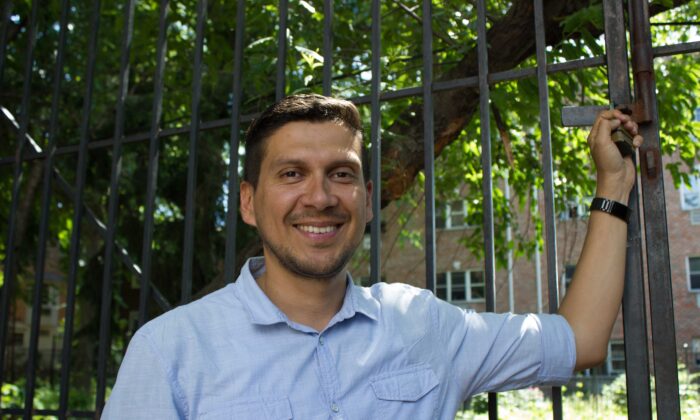 Pezou: Can you tell me a little bit about your background and how you became interested in environmental issues?

Carlos Martinez: I was born and raised in Pereira, Colombia, at the foothills of the Andes, and I had the privilege of growing up surrounded by nature in a region well known for its coffee-growing tradition. From the city, I was able to explore diverse natural environments, learn from sustainable agricultural models, and be inspired by community development initiatives.

While navigating mountain trails, natural parks, and local farms all my life, I became interested in pursuing a career in the environmental field. I obtained a bachelor’s degree in environmental administration at the Universidad Tecnológicade Pereira, and I was fortunate to use my own surrounding environment as a laboratory.

During my last years in college, I was drawn to urban issues and the role of public spaces in building and strengthening communities. A decade later, I decided to pursue a master’s degree in urban planning at Hunter College, where I connected with like-minded professionals in New York City in the quest for a more resilient and equitable city.

I immigrated from Colombia and permanently relocated to New York City in the mid-2000s. In my early career, I worked with Green Map System, where I supported a global network of mapmakers charting their local environment. This opportunity opened the door to work with other fellow environmentalists, artists, planners, and community members who wanted to make an impact in their own backyard.

I later transitioned to work with Partnerships for Parks as part of the Catalyst Program, where I supported park stewards in historically underserved parks across the city. se experiences allowed me to connect with many New Yorkers at a deeper level and understand their realities in reference to their neighborhood parks.

Pezou: How did you get involved in GreenThumb—and how does it relate to your training and practice in the arts?

Mr. Martinez: While I was working with Partnerships for Parks, I co-founded HibridosCollective, an interdisciplinary collaborative working to reenvision spaces through community-based art practices. Through the collaboration between artists and neighbors, the collective has activated sidewalks, parks, plazas, and other unconventional spaces.

One of the most rewarding projects was the revitalization of an abandoned burial ground in my neighborhood in Jackson Heights, which neighbors collectively transformed into a community space. Today, this neighborhood gem continues to offer a place to connect with nature and neighbors.

I joined NYC Parks GreenThumb six years ago as the deputy director and I was recently appointed as the director of the nation’s largest municipally-led community gardening program.

Pezou: Have you dealt with any particularly challenging gardening projects as part of your work with GreenThumb? I’d imagine that, for example, gardening on or near brownfields or other polluted land would present difficulties.

Any experiences that ultimately taught you something new or unexpected about the nature of what you’re doing?

In addition, since 2019, GreenThumb has been rebuilding community gardens in housing developments through an innovative partnership with the New York City Housing Authority (NYCHA) that will engage and support 50 gardens across the city.

Pezou: Do GreenThumb or its gardeners ever get pushback from the community—say, from someone who might believe that the land being gardened should be developed, or by someone with other concerns about it? If so, how do you respond to that?

Mr. Martinez: On the contrary, community gardening continues to thrive through the partnership between New York City government, volunteer community gardeners, and countless partners who collectively care for these unique public spaces in a shared spirit of service.

Since the start of the pandemic, we have been receiving countless of requests from New Yorkers that want to join or start a new community garden. People are looking for a respite from limited spaces for connection and community.

Pezou: We call our series “Environmental Warriors,” so I like to ask people if they have a unique “environmental war cry”—that is, a personal mantra, motto, principle, or precept that guides them in their efforts to make the world a cleaner, better place. What’s yours?

Mr. Martinez: As we work together to build a path to post-pandemic recovery, my motto for the upcoming growing season is the theme of GreenThumb’s 38th Annual GreenThumb GrowTogether Conference: “Deeply Rooted: Growing Community Connections,” because this reminds me of the strength and resilience of gardeners in caring for the land and each other.