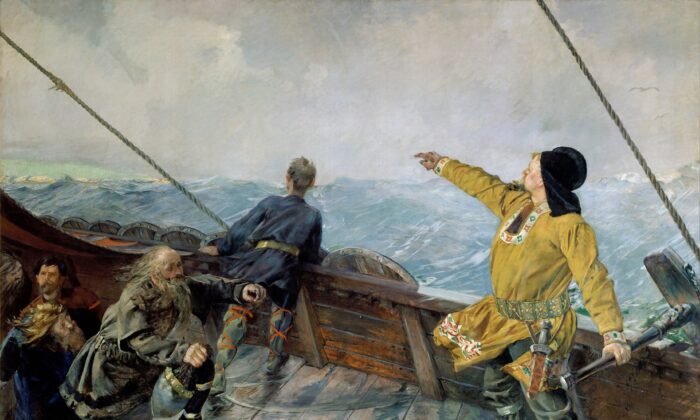 Vikings were a warring people steeped in mythology and legend stemming from the very wars and battles they fought. Known for their brutal savagery from factual and fictionalized retellings, the Viking rule remains one of the most captivating eras of world history.

In Arthur Herman’s new book, “ Viking Heart: How Scandinavians Conquered the World,” the reader is taken on a chronological journey covering nearly 1,200 years, from 793, when Vikings struck the island monastery of Lindisfarne in northeast England, to the contributions of World War II and post-World War II Scandinavians.

In much the same vein as one of his previous works (and one of my favorite books), “How the Scots Invented the Modern World,” Herman presents the struggles and triumphs of a people that in the modern age have been seemingly overlooked. When it comes to historical significance, the Scandinavians have unfortunately often been relegated to their Viking forebears, when there is so much more to the Norsemen’s history.

A Deep Look at the People From the North

Interest in the topic of Vikings has recently witnessed a massive resurgence with the hit show “Vikings” from History Channel. Herman’s book tapped into that interest, but the timing wasn’t the reason he wrote it—rather, it was time to do it. When his book about the Scots was published 20 years ago to great acclaim, he said his uncle suggested writing a book about his Scandinavian ancestry—Norwegian, to be precise. It was a long and thorough process, full of research, travel, and long family discussions. This labor of love is truly a lovely book that will undoubtedly make any person of Scandinavian origin or descent proud—much like I was after reading the book about the Scots (my mother is a McDonald).

author does a fine job of tracing the Vikings’ dominance and endurance in the Scandinavian countries. He makes a convincing presentation that the Vikings, much like many other civilizations, evolved, trading their primary economic source of war and plunder for the economics of trade.

reader is able to follow the rises and falls of the Nordic people—from Ragnar Ladbrok to William the Conqueror to Gustavus Adolphus; their great adventurers—from Leif Erikson to Charles Lindbergh Jr.; their women—from Rusla to Queen Margaret of Denmark; their writings—from the epics and sagas to the works of Carl Sandburg; the transition from paganism to Christianity; their early institution and practice of democracy; and their individual and collective contributions to saving the world from fascism, saving millions from starvation, and establishing the gold standard in honoring those who work toward the prize of peace.

“ Viking Heart” is a timely book, especially given the current climate in which America finds itself. With the ongoing social narratives that attempt to convince people to be ashamed rather than feel a sense of pride about their heritage, this book gives countless reasons for the latter.

Before starting the book, I sensed the inevitability of a fun read. With Vikings in the mix, how could it not? Herman didn’t disappoint. Interestingly, the author connects, on numerous occasions, the past to the present by tying in the Norse culture of many centuries ago to today. Though modern Americans consider themselves peace-loving people, our pop culture often imitates Norse culture through books, films, and TV, such as “ Lord of the Rings,” “Game of Thrones,” and the aforementioned “Vikings,” as well as video games like “Assassin’s Creed: Valhalla.”

One to Add to the Collection

For those who are collectors of all things Vikings, “ Viking Heart” is most definitely one to add to the collection. For those who don’t know very much about the Norsemen, this book will introduce you to a truly fantastic—literally and figuratively—world and will also place you on a path to discover the true history and the folklore history of the Scandinavians, including an introduction to the various sagas and epics that are the foundation of Norse mythology.

For modern Scandinavians and those who descended from them, this book will instill a strong sense of pride and honor. And lastly, for those who have spent countless hours reading, watching, or playing in the fictitious world of the Vikings, this book will insert a layer of reality. But when it comes to the epic world of the Norsemen, even fact often reads like fiction, which is only one of the many reasons that Herman’s new book is worth reading.